One of our new members describes her experience so far… 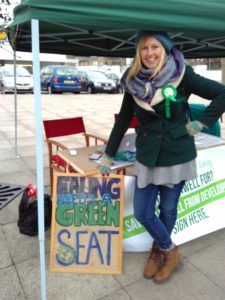 “Most of us don’t really think about what members of local political parties get up to. The main interaction you will have with active members is probably around election time when they come knocking on your door to tell you about their activities and asking you to vote for them.

Like most people, I have always been polite, taken their leaflet, but other than that never really engaged. When it was time to vote, I didn’t recognise any of the faces on the ballot and would just tick those who were standing for the party I wanted to support.

I joined the Green Party just over a year ago and became an active member about 8 months ago. I didn’t even really know what an ‘active member’ was. First of all, did you know that just by voting you haven’t done even half of the things you could do to help out your party of choice? And most of us find even just going to the polling stations a chore.

How did we become so disengaged from politics? How did we forget that everything around us is politics; from the height of your pavement’s curb, to the litter in your local park and rubbish collection, to the new high-rise development going up in your back garden. People often say they are not interested in politics. I now know that this is like saying you’re not interested in breathing. You may not be interested in it, but it is still happening.

So I went along to my first Ealing Green Party meeting which they hold once a month. If you are a member of the Ealing Green Party you are always allowed to attend. I don’t really remember why I decided to go along. I don’t have any friends who are active for their local political party or anything like that, but I guess I was curious as to what the people would be like.

When I arrived the meeting was in full swing and I didn’t have a clue what was going on. They were talking about issues I had never heard of before, using terms which I didn’t understand. I took notes and tried to take in as much as I could, but pretty much all of it was going over my head.
It wasn’t until after when we all had a drink and people were chatting, that I started to get a better understanding about how things work. Everyone was very friendly, so I felt like I could ask questions without worrying about sounding stupid. I didn’t even know the basics, like that a borough is divided up into wards, and I didn’t even know which bits of London belong to Ealing. I discovered how big the borough of Ealing actually is, and realised how little of it I’d explored!
A few months later, I have a much better understanding of local issues and feel confident and supported in meetings to be able to ask when I don’t understand, and sometimes even contribute a point of view myself! The learning curve is steep, and I feel like I’ve become a little bit smarter every time I come away from one of our gatherings!
After this first meeting I had loads of ideas buzzing around in my head and I jotted them all down into an email and sent it to some of the people I had been chatting to that night. They responded and asked me to get involved with various things.
And I think that’s how it kind of starts. You show that you are interested and committed to help, and the group will take you in with open arms. Local parties have extremely limited resources, including people. They are all doing this on a voluntary basis, out of concern for their local neighbourhood.

So if you can do more than just show up at the polling station at election time (and please, do that as well!!), you really should. It’s a brilliant way to get to know your borough, not just the places that you would normally hang out. You make friends with your fellow party members which is great; especially in London where you have to travel at least an hour to go have a cup of tea with someone. It’s lovely to know people so near by!
And perhaps most importantly: slowly but surely you start to understand more about how things work. How decisions are made, and how you can help create change. You learn what the issues are, whether it is housing, protecting green spaces, safety, roads, traffic, hospitals, and before you know it you’ll be so much more knowledgeable on these issues than you ever were.
As an active member you commit as much time as you can. You can pick the particular issues you’re passionate about. You can decide how you would like to help, be it designing flyers, knocking on people’s doors, helping with data entry, writing for the party blog, helping with social media, or going to events that are relevant and reporting back to the group what you’ve learned. The list is endless.
Whatever you decide to do, know that we are out there trying to make our shared living space a better place for all of us. If you see us handing out flyers, come have a chat. If we come knocking on your door, let us know your thoughts on local issues. We are doing this for all of us, and we are happy to do it.”
Marijn Van De Geer 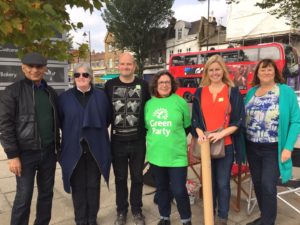 Being an active member can include the following:
What you get out of it

If you live in the Acton Central Ward you can vote for Marijn to be your Green voice on 3rd May! 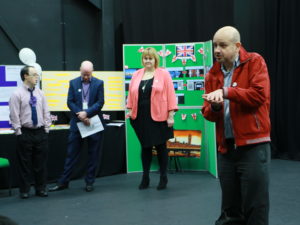