Skip to content
Home >Archives
Another cyclist dies on London’s deadly, polluted roadways. On 8th November cycling campaigners came together with the people of Islington to remember father of four Jerome Roussel who, as so many before him, was killed in a collision with a Heavy Goods Vehicle.
At this protest and “die-in” there was a feeling of growing anger and frustration at Islington Council, who were watching from the building that formed a backdrop to the commemoration.  This anger was articulated in the speeches given by, among others, Caroline Russell, representative of the Green Party on Islington Council as well as the London Assembly, and Donnachadh McCarthy, founder of the Stop Killing Cyclists pressure group that had organised this event.
But without doubt the most affecting address was the one given by Victoria Lebrec, another victim of Islington’s roads who had her leg amputated after it was crushed by a HGV.  Ms Lebrec branded Islington Council’s lack of action on cycling safety “an insult”.  And it is no wonder, when, despite having cash reserves that have swelled to over a quarter of a billion pounds, this local authority has built no protected cycleways in the last TWENTY YEARS.
Despite the deaths. Despite the life-changing injuries.
Not a metre.
Shame on you Islington Council.
The focal point of the commemoration was the moment when the members of the protest walked out into the road in front of the Islington council building and “died”. For ten minutes we lay motionless in a symbolic gesture, and a cry for action, while the police held the traffic at bay.
It is to be hoped that action will now be taken, and that Islington’s long wait for safer highways will soon be at least partially ameliorated. The council’s reaction to this situation, a pithy statement on Twitter that they were “open” to improvements in cycling facilities, hardly makes for a solid commitment, but we will see.
Meanwhile, the very next day after this demonstration, and a week and a half after a protest in Ealing that followed after the death of Claudia Manera, another cyclist is killed in West London. And yet again the culprit is a heavy goods vehicle. 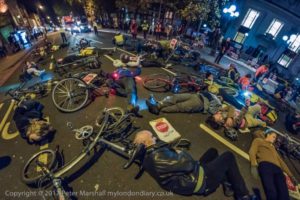